Beyoncé is back with her new visual album Black Is King, which will premiere on July 31st on Disney plus 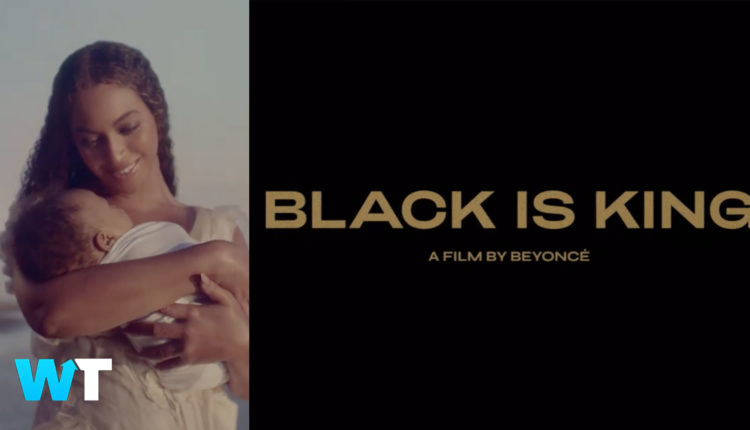 In just a week, Beyoncé is trending again. Last time, Beyoncé dropped her single, “Black Parade”, during Juneteenth. For those of you who want to hear more, you are in luck. Beyoncé is back with her new visual album Black Is King, which will premiere on July 31st on Disney plus. According to Disney Plus, the visual album is a reimagination of “The Lion King.” It tells the story of Black families’ “transcendent journey through betrayal, love, and self-identity.” Through such a story, Beyoncé and Disney aim to encourage “today’s young kings and queens in search of their own crowns.” On top of that, Beyoncé  hopes to raise the voices of the Black community and to “celebrate Black resilience and culture.”

With this mission in mind, the production team represents “diversity and connectivity,” giving a chance for producers to shine. Other than Beyoncé, the album features an exciting array of artists. This list includes Blue Ivy Carter, Jessie Reyez, Childish Gambino, Kendrick Lamar, Jay Z, Tierra Whack, and more. On Twitter, one user congratulated the production team for incorporating such a variety of voices.

Including a throng of other South African and African actors & dancers featured in Beyonce's upcoming visual album movie for Disney. #BlackIsKing out on July 31 on @disneyplus pic.twitter.com/EceHla9Txn

In just a month, a single AND a visual album? Yes, queen Beyoncé  never fails to surprise us. After the announcement, many are looking forward to this historical production and are expressing their appreciation and admiration for the artists. For example, one user says that Beyoncé’s “place in the history of music industry has been secure for a long time, now she is securing her place in Black History.” 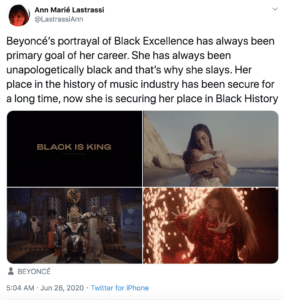 Indeed, Beyoncé is a legend. As a role model, Beyoncé constantly inspires her fans to fight for their dreams and justice for all.  As we can see, this inspiration comes from Beyonce’s endless excellent and thoughtful projects. A user commented, “Beyonce has been working this whole time. That woman just never stops. We don’t deserve her.”

So Beyoncé been working this whole time. That woman just never stops… i bet she’s in Hamptons cooking up something else for us. There’s also two more projects for netflix…. she been working endlessly 😩😩 we don’t deserve her

Beyoncé works hard for a reason. Just as  she wrote on her website, “Black excellence is a form of protest.” Through her ceaseless hard work, Beyoncé makes us believe that we can pursue our dreams.

BROWN SKIN GIRL IS GETTING A VISUAL!!!

What’s your first memory of Beyoncé’s work? Comment down below. For more social media and celebrity news, follow WhatsTrending. Check out this article to learn more about Beyoncé’s Black Parade.

Can’t wait until the end of July? Check out this quick 1-minute trailer to learn more about Black Is King!