Morphe Cosmetics has long been known for its partnerships with internet-based content creators, like James Charles, Jeffree Star, and Manny MUA Now they are partnering with Charli and Dixie D’Amelio to launch their very first sub-brand Morphe 2 with the tagline Hint, Tint, Glow. 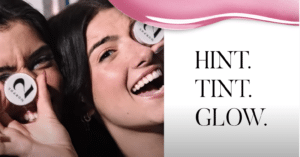 Morphe 2 will be launching July 30 and will focus on a younger Gen Z demographic that prefers a “no-makeup look” that can’t be created from the traditional Morphe line. The line will later be available on Ulta.com and in their flagship stores on August 2.  The no-makeup look that this line will be touting became popular with the rise of TikTok and VSCO girls who were more focused on having fun, feeling free, comfortable, and body-positive than they were about whether their eyeliner is on point or not.

As brand ambassadors for Morphe 2, Charli and Dixie D’Amelio will be using and promoting products to their fans and potential customers before their launch. They will also be showing tutorials and speaking to the press via their TikTok presence. Charlie has roughly 72.4 million TikTok followers with Dixie holding around 30.0 million. And if their fans are as loyal as others in the beauty community it is assumed that the products will quickly sell out.

Though Morphe has made a name for themselves as a powerhouse brand by partnering with influencers like Charlie and Dixie  D’Amelio’s some of their previous partnerships have not been as smooth and successful. Recently Morphe’s online store as well as their in-person flagship stores have stopped carrying the Jeffree Star x Shane Dawson Conspiracy Pallette after Shane Dawsons pedophilic comments became public. And then cut all commercial ties with Jeffree Star after the continued controversy between Jeffree Star, Shane Dawson, Tati Westbrook, and James Charles.