Disney Revamps Jungle Cruise Ride from its Racist past

A much needed make-over
By Hailey Medina

Disneyland’s Jungle Cruise ride in Anaheim, California, is newly improved and outrunning its racist roots. Following years of, in Disney’s words, “negative depictions of native people”, the ride has been revamped to remove indigenous “savages” and weapon-wielding Africans that provide gross misrepresentations. The ride usually takes visitors on a tour of Africa, Asia, and South America with humorous scenes and an upbeat tour guide. However, both employees and riders alike grew tired of the pained faces of people of color when encountering certain parts of the beloved yet problematic ride. The ride originally opened in 1955, when Disney openly promoted racist ideals and even depicted slaves in Fantasia. However, heading to Disneyland’s 66th anniversary, the park has finally revamped the racist ride in hopes of a more inclusive and enjoyable experience.

How was the ride racist?

Historically, Native Americans and Africans have been stereotyped as “savages”, and this idea is unfortunately perpetuated through school systems, popular culture, media, and passed down familial biases. And as much as I would rather not believe it — Disney is guilty too.

Some of the (now removed) ride features included a shrunken-head trader, spear-wielding Africans, and a “trapped safari scene” showcasing a white traveler climbing to safety while Native Americans stand nearby, directly in the path of a raging rhinoceros.

The shrunken-head trader, formerly known as “Trader Sam”, is a blatantly racist caricature that offered to exchange two shrunken heads “for one of yours.”

As all the adults on the ride recognize, this is not a realistic depiction of anyone, and it feeds into the narrative of uneducated, ruthless “savages” characterized by misguided spirituality and associations with being “wild”.

The weapon-wielding Africans surrounded by piles of human skulls also did not show viewers accurate descriptions of Africans, and simply perpetuated the idea of foreign savagery, violence, and an “uncivilized nature” that is routinely falsified through history. This idea of “primitive” Africans and foreigners stems from the mouths of colonizers in the 19th century, as they crafted the narrative of non-white “savages” to justify slavery and the inhumane treatment of people of color.

The previous negative depictions of Native Americans and Africans as “savages”, cannibals, and attackers have been removed, as Disney wants to better “reflect and value the diversity of the world around us.” These removals, though late, are deeply appreciated and serve as vital steps in updating systems and norms of the past that are not, and probably never were, acceptable.

The colonialist lens through which the ride was previously seen, now portrays a more light-hearted narrative showcasing animals trying to steer ships, navigate the wild, and bring unproblematic joy back to the Jungle Cruise.

The “trapped” scene is also more inclusive, showing that non-white characters get to be safe too. Now, the tourists represent multiple nationalities and cling to safety together — because being a person of color does not come with an innate knowledge on how to fight off rhinos.

These positive changes were unfortunately met with criticism from conservatives arguing that it is not Disney’s job to be “woke”. There were also several complaints about the changes negatively affecting the Jungle Cruise ride’s immersive nature.

I AM A GROWN REPUBLICAN CHRISTIAN MAN AND I AM UPSET THAT DISNEY WORLD HAS REMOVED RACISM AND DEPICTIONS OF SEXUAL ASSAULT FROM MY FAVORITE CHILDREN’S RIDES!

However, if racist statues are necessary for someone to remain immersed in a children’s safari ride, that says a lot more about the viewers than anything else.

Frankly, Disney does not care about being “woke”, they simply are a company that plans on being around for a long time. And to do so, they learned that they need to update and evolve along with the world, or they will be left behind. Disney acknowledges its problematic past and actively creates a more inclusive future for its visitors, and because of such, they are rewarded. As this Twitter user mentions, Walt believed in evolving for Disney and knew it would never be finished because it would be changing forever to encapsulate the dreams and ideas of modern-day visitors.

"To all who come to this happy place; welcome. Disneyland is your land."

Walt said that. He certainly didn't envision the world we live in today, but he'd hoped his parks would grow and change to keep up with it – not become a relic of a sad past.

What people need to remember is no one wants to “cancel” Disney, in fact, these necessary changes are only going to keep Disney around longer to flourish and bring families unbridled joy for generations.

Disney has slowly but surely been fixing its problematic rides and replacing them with updated versions that promote a healthier, more inclusive look into the future.

In 2017, the “Pirates of the Caribbean” attraction revised their auction scene as it previously portrayed women being sold into marriage as “wenches”. 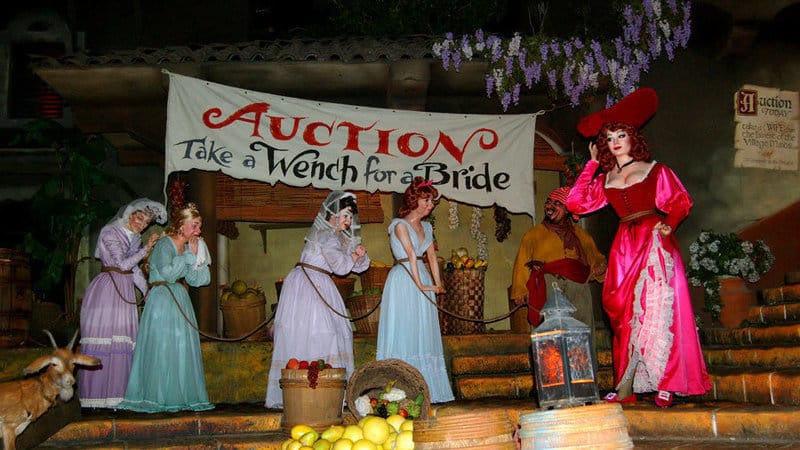 The new scene shows female and male pirates selling stolen goods. The changes prove  the essence of the rides have not changed, and it is easy, doable, and necessary to promote inoffensive ideas while maintaining the magic of Disney.

Following the cultural reckoning of 2020, after the murder of Geroge Floyd, Disney announced it would remove the “Song of the South” references from its Splash Mountain ride and replace them with features from “The Princess and the Frog”.

As Nora McGeevy wrote from Smithsonian magazine, Splash Mountain is riddled with references to the 1946 movie “Song of the South”, which features romanticized depictions of black servants on plantations in post-Civil War Georgia. Now, the song that plays will no longer be from the movie, and will instead celebrate Disney’s first Black princess, Tiana.

At the end of the day, Disney is not a stranger to problematic behavior, but they are also not shy to admit their missteps and take actionable steps for the better. As more inclusive media is produced, inclusive attractions will only grow. “Coco”, for instance, held the door open for a Día de Los Muertos event in Anaheim that connects audiences to new cultures and celebrates the special day with a memory wall for guests to write letters to lost loved ones. A Disney representative has stated, “We wouldn’t have the ability to celebrate Día de Los Muertos if Pixar hadn’t created ‘Coco’ for us”.

Thus, an increase in representation through films and television shows will only increase Disney’s inclusion as years go on, and I am excited for the future of what Disney holds. It is easy for others to criticize Disney for trying to be politically correct, but what they are missing is the fact that although trendy, it is still correct.

Disney does not want to be “woke”, they want to be ever-green and to do so, they must ensure that they acknowledge their problematic past and take actionable steps to an inclusive future to ensure that the dreams that all wish — will come true.