I don't know whether to cry or connect my headphones. Both?
By Liza Bautista

They say never date a musician or you’ll have a song written about you. What happens when it’s two successful pop singer-songwriters? Julia Michaels and JP Saxe have broken up and both are releasing songs about the ordeal. Now they’re even trading verses on Instagram.

The JP Saxe and Julia Michaels breakup albums are going to rip me to shreds, damn.

Here’s the timeline. Michaels and Saxe started dating shortly after writing the mega-viral song “If The World Was Ending” together back in 2019. Rumors of the couple split started surfacing earlier this month.

impromptu concert in the park in Buenos Aires. new song is out Sep 23 :):

The snippet includes lyrics about a breakup,  “When you think of me / Are you setting fire to every memory? / Do you believe what doesn’t last forever don’t mean anything?”

“‘Cause I swear I loved you fully / And I’m sorry not for staying who we thought I’d be,” continued Saxe. “When you think of me, am I just another man who leaves?”

Michaels seemingly responds to “When You Think Of Me” with lyrics of a new untitled song on her Instagram story.

“You’re just another man / And this is just another doorway / Using promises like they’re some kind of twisted foreplay/ You keep saying that you’re staying / When we both know that’s not your forte,” her lyrics state.

Saxe trades back by revealing the second verse to “When You Think Of Me” on his Instagram. 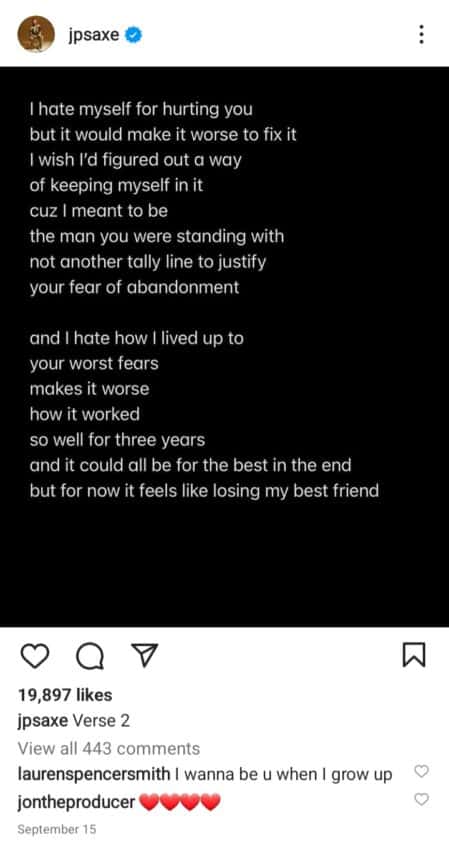 “I hate how I lived up to / your worst fears / makes it worse / how it worked / so well for three years / and it could all be for the best in the end / but for now it feels like losing my best friend.”

The pair’s back and forth with heartbreakingly poignant lyrics send fans on a tailspin.

jp saxe and julia michaels breaking up is affecting me personally like the music is abt to be soul-crushing. songwriter x songwriter is the trope that keeps on giving, thanks to capitalism. i hope to be devastated

I hate that Julia Michaels and JP Saxe broke up, but the new music is givinggg. I’m here for it. ❤️‍🔥

Fans are simultaneously being fed amazing music content and revelations about the ex-couple’s relationship.

I’m sorry to me too

Michaels has since deleted her lyric posts. She has posted a TikTok with the teased song playing while she’s in the driver’s seat of her car. No news yet on when it will be officially released.

Saxe’s song was released on September 23rd accompanied by a solemn music video.