An influencer from Texas was found dead on the side of the road this past weekend. Alexis Sharkey, the 26- year old Instagram influencer had gone missing on Friday. She was supposed to meet with her friends to hangout on Saturday, and when she didn’t show up, they started to worry. Her body was found […]
By Alice Braga

An influencer from Texas was found dead on the side of the road this past weekend. Alexis Sharkey, the 26- year old Instagram influencer had gone missing on Friday. She was supposed to meet with her friends to hangout on Saturday, and when she didn’t show up, they started to worry. Her body was found Saturday around 8:30 a.m. on the side of Red Haw Lane. Alexis had 25,000 followers and was also working with Monat, a hair and skincare company.

“She [Alexis] is attached to her phone. She is a social media queen. She is an influencer who works from her phone,” Tanya Ricardo, a friend of Alexis, told reporters. Her friend’s failure to respond their texts therefore immediately raised some red flags.

“When you start to hear these stories and you just know that’s not right, something’s wrong — she’s never that far away from her device; [she’s] standing up her friends; [her] husband doesn’t know where she is, all of that. All of that strikes fear,” Alexis’ mom, Stacey Clark Robinault told reporters.

On Saturday, after no one had heard from Sharkey in over 24 hours, Robinault posted on social media asking people to help find her daughter. The post was widely shared, but unfortunately by the time Sharkey was found she was already dead. 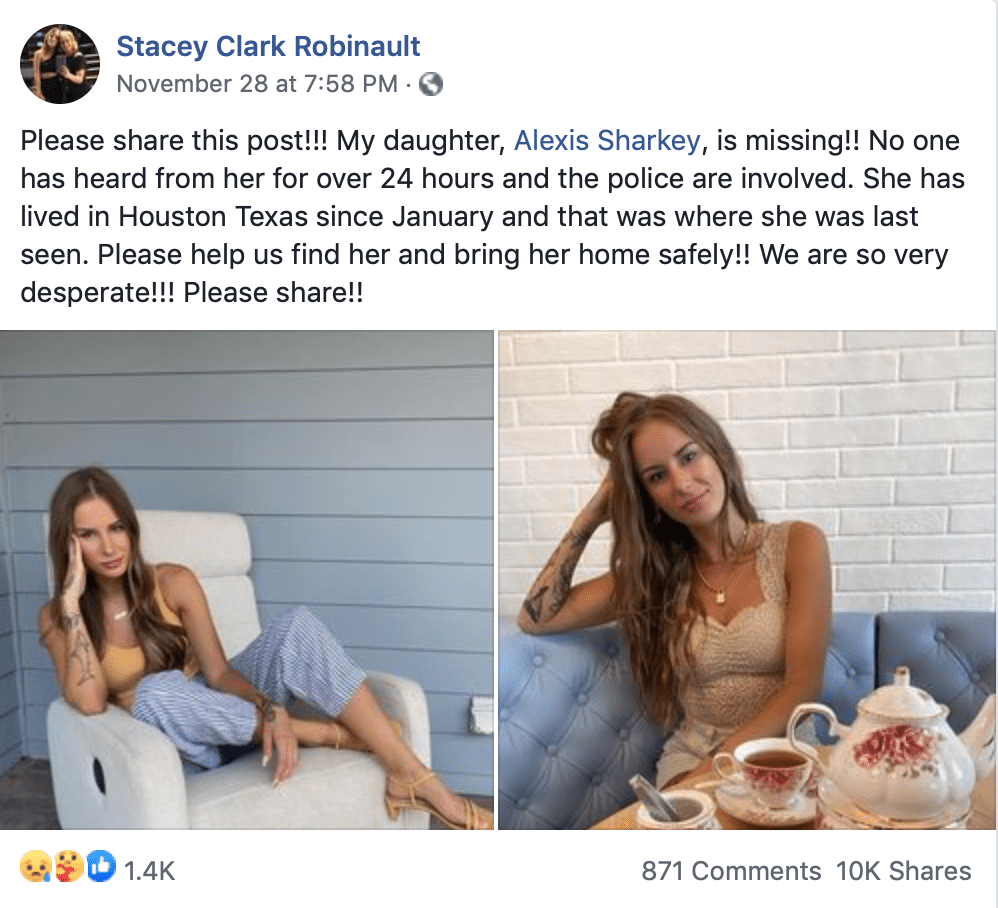 Police reported she had no visible wounds and the cause of death is still being investigated. Sharkey’s mother  has said that she suspects her daughter was murdered. “I do believe she was murdered. Yes. From what I’ve been able to gather as well as a mother’s gut,” Robinault said. “I learned very young as a mom to trust my gut. It’s not let me down, ” she added.

“The way in which she was found — my child would never do that to herself,” Stacey Robinault said. “That doesn’t even make sense. That is absolutely foul play.”

Alexis’ friends also suspect foul play. “I mean, just threw her on the side of the road, naked, like garbage,” Tanya said. “I just, I don’t get it. No one gets away with something like this. No one.”

Before Alexis died she had confided in her friends that she feared for her own safety. Sharkey told her close friends her fears a month ago during a trip they took to Marfa, Texas.

“She confided in me that night … she’s petrified,” a friend said. “This girl is scared for her life.”

Her loved ones describe Alexis as a selfless, kind person who was always willing and ready to offer a helping hand.

“She was a friend to literally all,” said one of Sharkey’s friends. “Such a good person.”

Sharkey had moved to Houston with her husband earlier this year. Her husband spoke with reporters following her disappearance. He sounded upset, which is reasonable considering the circumstances. He said he did everything in his power to find Alexis. Now, as her family and friends prepare for her funeral, they’re still looking for answers.

Share this as much as you can. My friends killer still is roaming free. No one is even in custody. It’s sick and horrifying. #justiceforalexis @houstonpolice https://t.co/fnn6byHjee

Everything I’m learning about this makes my heart ache even more. Our company is a FAMILY, and when one is hurting, it trickles down.

Praying for Alexis, her family, and those working the case – that they will find out what happened to her ♥️

“The horrific nature of her last moments must’ve been … I can’t even. I can’t even go there,” she added.

In a Facebook post, Alexis’ mom also thanked the public for their support. “Please give us this time to grieve this incredible loss to our family and this world!!!” She added.

Robinault said her daughter went missing Friday, and she found out about her disappearance the next day after Tom Sharkey (Alexis’ husband),  called to say he hadn’t heard from his wife since Friday.

On Sunday, Tom posted pictures of himself with Alexis on Facebook, writing in one of the captions, “My world! My everything! I’m so lost right now! My one and only.”

But friends of the influencer revealed that she had been having issues with her husband. In fact, Tanya says that the couple might have been calling it quits. “Recently, she opened up to us about it and divorce was being filed,” she said. “She was a very private person. She didn’t share a lot about what was going on at home.” And her mom initially said that Alexis Sharkey had left her apartment Friday after an argument with Tom. This made people suspicious, like these twitter users:

Does anyone else think Alexis sharkey’s husband was involved?…

Statistically, yep. History of controlling behavior, physically abusing her & the many instances of *strangulation*—made her situation far more likely to be lethal.

I know this is just a tik tok, but the irony is not lost when you see it.#AlexisSharkey #JusticeForAlexis #VAWA pic.twitter.com/3FIrDMWAua

Tom clapped back at those who were accusing him of being involved in the murder of his wife. He posted on Instagram that he had been cooperating with authorities in the case: “I have been assisting the deputies and making phone calls to fine [sic] out what happened to my wife. Next time…. stop and think! And realize! You don’t know it all!,” he wrote.

A memorial has been scheduled to honor Alexis’ memory, and a go-fund me was started to cover the funeral costs and travel costs. 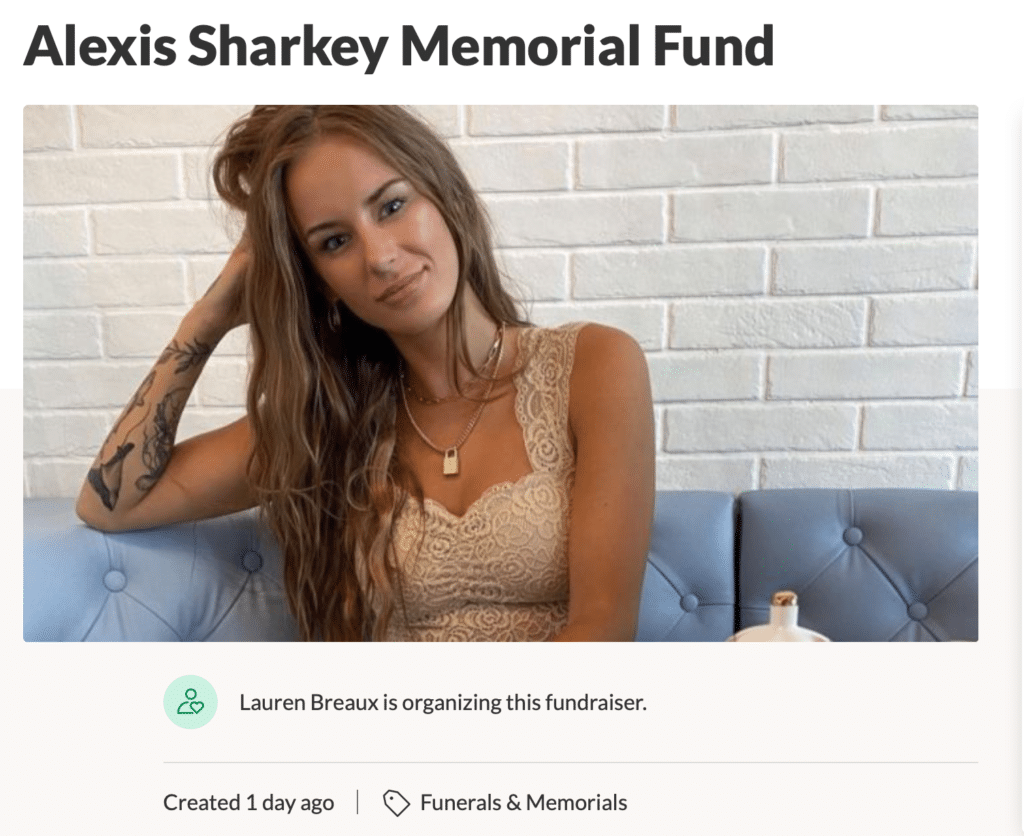 We can only hope the police and local authorities are able to uncover the truth and provide the family with some closure and peace.