Noah Cyrus Selling Her Break Up Tears For $12k A Bottle

Noah Cyrus is selling the tears from her break up with Lil Xan for $12,000 a bottle to promote her upcoming album "Good Cry".
By Alex Firer

If you’re the kind of huge weirdo who is awash in money and have a good sense of humor, then maybe this deal is absolutely perfect for you. Noah Cyrus, who broke up recently with the SoundCloud rapper Lil Xan, as part of a stunt to promote her upcoming album “Good Cry” is selling her official break up tears on PizzaSlime.com, and you can check out the bottle here. One catch: the bottles cost $12,000, so I guess only buy it if you happen to be absolutely insane.

This is approximately 12 tears made by Noah Cyrus as a result of sadness. Human digestion of these tears is not suggested cause tears are generally pretty salty and that would just be super fucking weird if you drank someone else’s tears 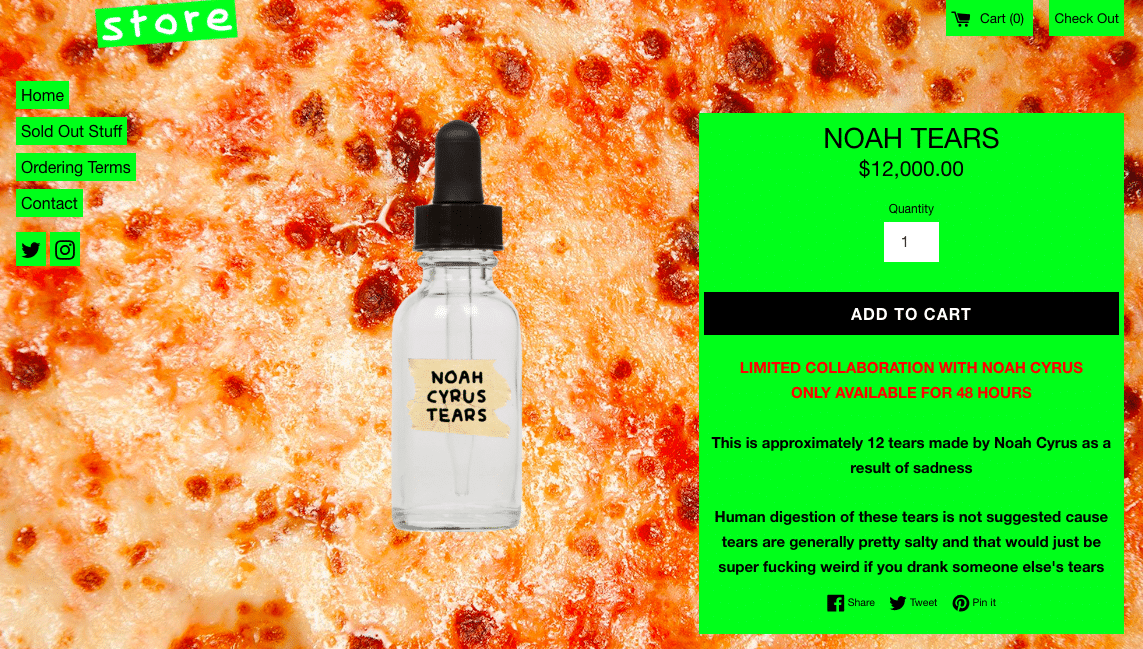 However there’s a catch — there’s no actual bottle of tears! It’s a bit! According to TMZ, one fan began a GoFundMe to recieve the bottle in question, only to discover that if you actually order the bottle you get told the bottle does not exist, and you get refunded the money.

TMZ seems very upset about the whole thing for some reason, but we can’t help but be blown away by how funny Cyrus is. All I get out of my break ups is a lot of self pity and an extra angry 100 more hours logged into whatever video game I’m playing. So the tears aren’t real! Big deal! It’s about the spirit of the tears! It’s about the feeling that can be bottled up and then sold to weirdos!

What do you think of the tears? Let us know in the comments or on Twitter at @WhatsTrending.