Bodies Bodies Bodies star Amandla Stenberg has taken to Instagram to let everyone know that she is more than tired of people commenting on her chest. This all comes after a negative review from NYT film critic Lena Wilson claiming the film was not the best…

The film, which recently debuted, has been getting some positive traction online until this past weekend when New York Times film critic Lena Wilson and her comments started trending online.

The title of the article ‘Bodies Bodies Bodies’ Review: ‘Euphoria’ With Knives depicts the film as “nothing special” and even has lines like: If you’re a fan of slashers, you’ll recognize the plot: Young, hot people get trapped in a remote locale and are picked off one by one.

However, the line that did not set well with quite a few people happens to be, “The only thing that really sets “Bodies Bodies Bodies” apart is its place in the A24 hype machine, where it doubles as a 95-minute advertisement for cleavage and Charli XCX’s latest single.”

So let me get this straight or as straight as I can get things. Lena Wilson sexualized Amandla Stenberg, who defended herself with humor in Wilson’s DMs and now we’re supposed to feel bad for Wilson, a white lady who says Amanda has more “social power than her”?

In the now viral video with over half a million views, Lena Wilson depicts the message she received from the “Bodies” star. The video is now private on the critic’s account.

In the video, Lena Wilson claims the star has more social power in a scenario like this despite the conversation being a private chain between the two. In addition, Amanda Stenberg was accused of being homophobic from the message she sent.

Many were also unhappy with Wilson’s claim that Sternberg would have more social power over here even though this was a private thread which has now been thrown into the public eye.

Lena Wilson, a nepotism hire at the NYTIMES masquerading as a film critic when her criticisms are as mediocre as she truly is, decided to call Amandla Stenberg’s film “bodies, bodies, bodies” a “95 minute ad for cleavage.” This is how they were dressed… pic.twitter.com/o5PCq2ePhI 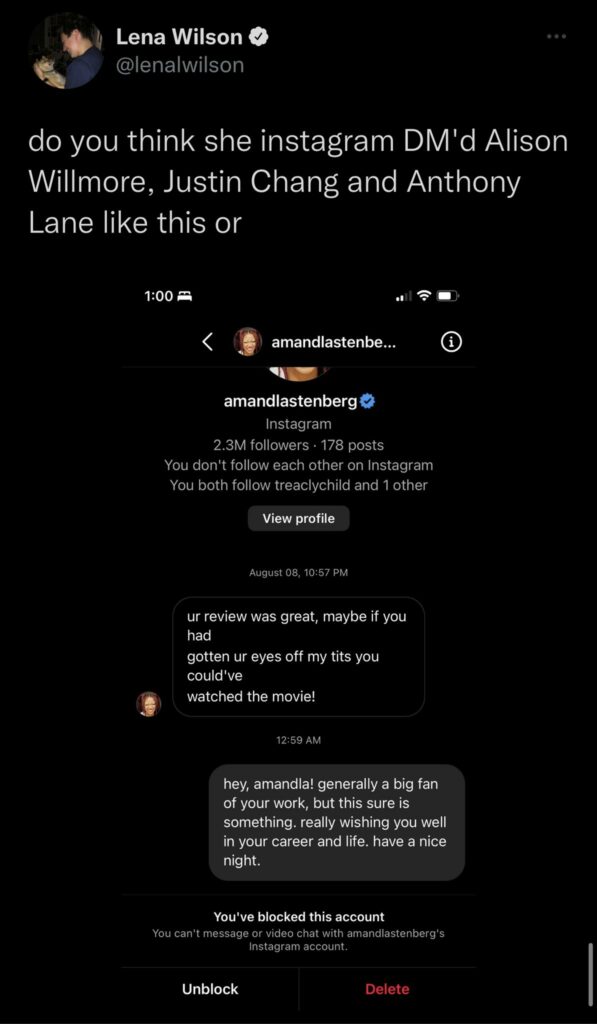 The tweet of course went viral and added to the mix of eyeballs on the review. Which is when we got Amandla’s response…

In the video, the star admitted that she thought her DM to the writer was playful and funny, and it was a joke! But she was firm that she was not happy about the review.

Amandla went on to say that in the end that no matter what she wears there will be a bit of cleavage. The 24 year old even thanked anyone who has “gone to see our 95 minute advertisement for cleavage.”

It's laughable that Lena Wilson complains about Amanda Stenberg using her social power to make her look bad, since Lena herself started all this drama by posting a private message between the two.

This all comes after the writer from the New York times criticized creator reporters like under the desk news. Wilson claimed that creators are not established publishers and should not be a source of news for anyone.

Just a reminder that Lena Wilson the film critic who hyper sexualized Amandla Stenberg in #bodiesbodiesbodies also sexualized a kids movie….
By comparing it to a grooming relationship movie pic.twitter.com/pNfvZFUzxx

In the end, let us know your thoughts on what you think of the Bodies Bodies Bodies now free publicity from this online back and forth.