He was a "one man party", a "good Catholic boy" and of course a good beloved friend. 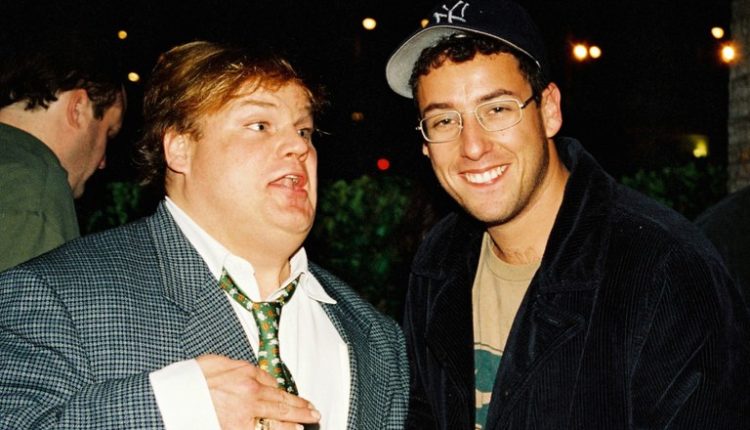 Chris Farley passed away 21 years ago today, on December 19th, 1997. To say he was a legend is to not give his comedic abilities the proper respect by putting it just into a word. He was an energy, a comedy spirit that performers to this day are trying to imitate, and to so many, he was a friend. In his new Netflix special, 100%, Adam Sandler, once Farley’s SNL co-star, Sandler sings a beautiful song in honor of his talented friend.

Sandler describes the first time he met Farley, calling him a one man party as he wore his belt too tight and danced with the cleaning lady, and did anything to make his friends laugh. Sandler remembers the times he warned him from living the hard lifestyle he did, telling Farley that he could end up like John Belushi or John Candy, but Farley pushed aside the concern saying those people were his heroes, and what Sandler said sounds awesome.

Sandler talks about how the last time he saw Farley was at Tim Meadows’ wedding party, and how heartbreaking it was when the news of his death reached him. Sandler sang about how hard it was to bury Farley, but not as hard as it was to watch his father cry. Sandler remembers Farley as an intense and beautiful man, who brought so many brilliant characters to life on SNL, lived a hard life but nevertheless always sobered up before mass.

Sandler’s song is beautiful and heartfelt. It ends with a plea to the audience to cheer as loud as they can so that maybe Chris Farley can hear it now. The video is pure, it is beautiful and pays homage to a man tragically gone too soon before his time.

What is your favorite Chris Farley performance? Let us know in the comments or on Twitter at @WhatsTrending.