TikTok Users Finding Cockroaches, Fleas, and more in Their Products

I hear it's buy one, get one flea
By Hailey Medina

As technology advances and smartphones find their way into the hands of toddlers and grandparents alike there is a new level of accountability placed on everyone and everything. Each day your back camera gets one step closer to “Big Brother”. This ever-watching eye is always ready to witness wrongdoing and broadcast it to anyone who will watch. Thus leading to a flurry of exposing bug videos on TikTok popping up everyday. From racist Karen’s spraying passers-by to bug infestations crawling into every company you can imagine — rest assured someone will be there to record it.  The latest expose follows a TikToker who found a special buggy surprise in her soy sauce. TikToker @sharneeellen posted a TikTok that has amassed over 4 million views and about 850 thousand likes. Sharnee explained how she picked up the soy sauce and felt  the bottle was almost empty. But, when she peered into the bottle, something else caught her eye.

Naturally, she cracked the soy sauce bottle open, while recording, of course, and apparently found four dead cockroaches swimming in a pool of soy. Rightfully grossed-out, she took to TikTok, explaining that she never left the bottle open, so the cockroach must have always been in there. This idea repulsed her family (who had been eating the sauce for weeks), as well as her followers who had much to say in the comments. 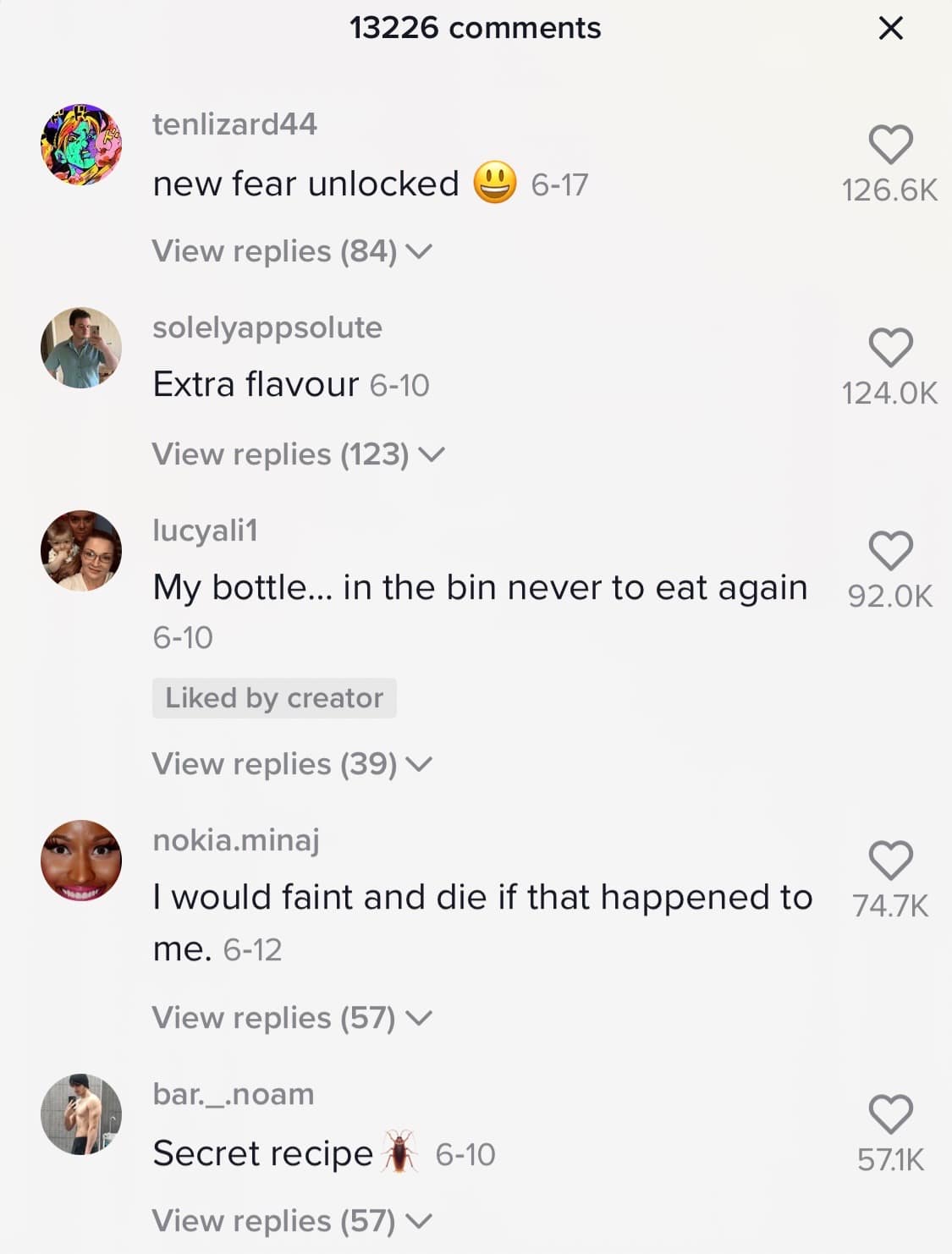 The top comments read “new fear unlocked” and “extra flavor” which perfectly sum up social media’s response to many discoveries — revulsion or entertainment, no in-between.

Another TikTok user, @alexacarcione, uploaded a video earlier in the week, revealing her upsetting experience with a McDonald’s Oreo McFlurry. The video turns stomachs around the internet, as users question what kinds of “extra crunch” were possibly in their meals . Carcione’s TikTok has garnered more than 200,000 views and 22,000 likes over her video of her McDonald’s McFlurry gone wrong.

Don’t eat @mcdonalds unless you enjoy cockroaches. All the manager said was “thanks for letting me know.” THANKS FOR THE TRAUMA #fyp #EW #mcdonalds 🤮

While using the “Oh No” TikTok sound, Carcione hangs out in her room while enjoying her Oreo McFlurry. However, soon after, a text overlay forms informing viewers that Carcione felt a “sudden crunch”.

“Surprise, it’s a cockroach,” she wrote.

Carcione then zooms in on the oreo tinted stain on her sheets, along with a closeup of what looks like a cockroach covered in ice cream. The bug was multi-legged and seemed to be partially deflated, pointing to Carcione’s self-identified “crunch”. Carcione described the “extra protein” in her shake, saying it was “like eating a Gusher. Pop. I felt like I was chewing on a shrimp shell.”

You would think the staff that handed her the cockroach-infested McFlurry would be apologetic but no, Carcione claims the manager said, “Thanks for letting me know,” without offering a refund. Since then, Carcione has stated she will be reaching out to a McDonald’s corporate office in hopes of getting to the bottom of this pesky problem. Until then, social media users unite to support Carcione and put pressure on the multi-million dollar franchise to hire a local pest control company. Perhaps that is why they say their ice cream machines are always broken?

Another company that has recently come under fire for their pest problems is U.K based retailer Pretty Little Thing. PLT is an online website that promotes trendy clothing aimed at young adults. But this week, the brand gained notoriety for a completely different reason — fleas.

TikTok user @amberogunsanya documented her experience with her buggy package as she explained how hearing rumors about bugs in packages encouraged her to check her own upon arrival. And it’s a good thing she did. Approaching with caution, the TikToker pulled out her items, inspected them, and identified a small several-legged- black dot upon opening. Although, the speck did not look like much, after poking it with her nail  — the crawling was a major tip-off.

Several users in the comments talked about their similar experiences with fleas from Pretty Little Thing and mentioned PLT’s recent inspection. Over a month ago, Pretty Little Thing supposedly addressed concerns about a flea infestation in their warehouse. “As soon as recent ‘bugs in packages’ allegations came to light we immediately launched an investigation,” a company spokesperson told The Sun. “This included an inspection by a 3rd party pest control review of our warehouse, we can confirm that we have found no evidence to support the claims being made.” 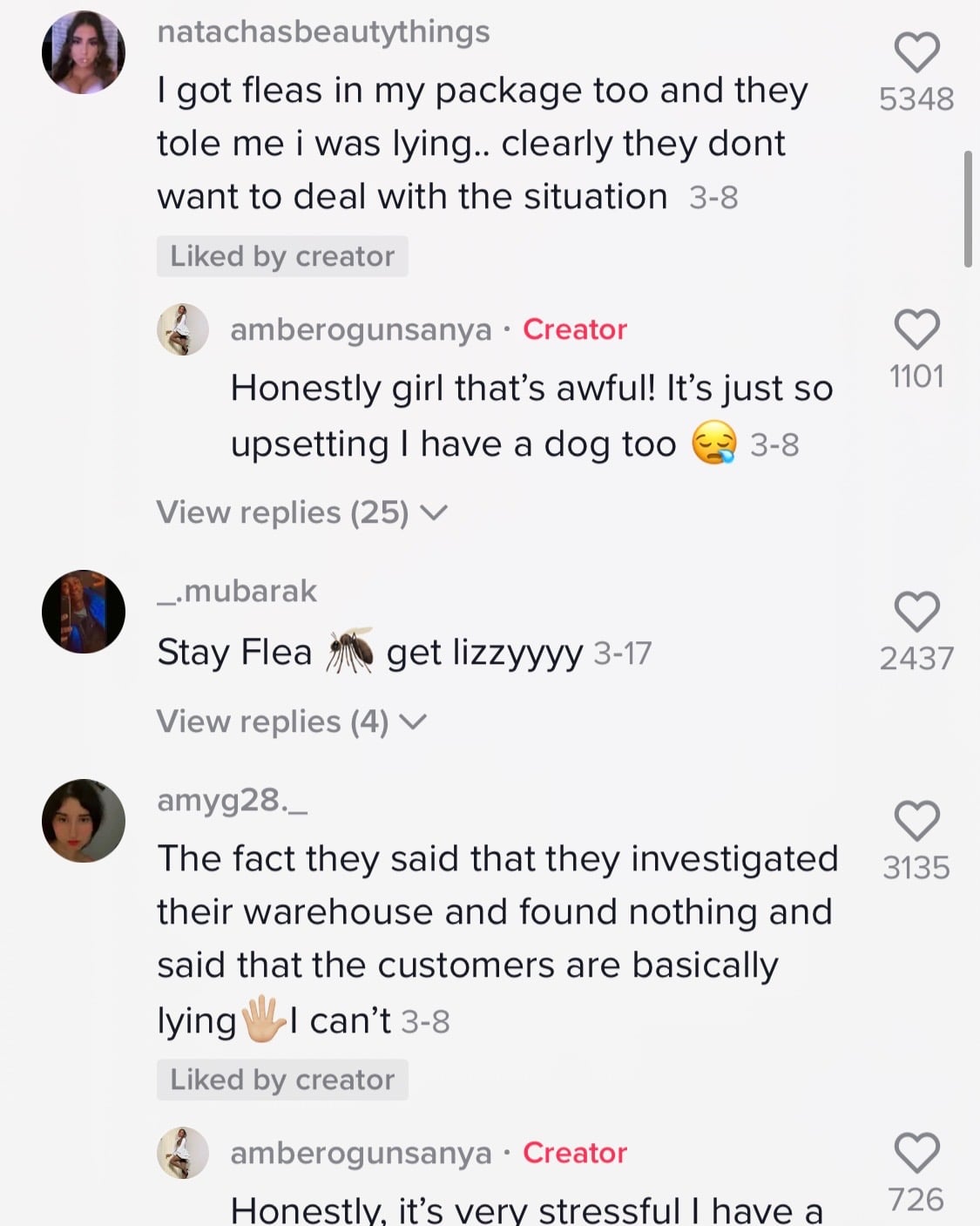 However, these statements seem to be nothing but lies as multiple users provide video evidence via TikTok. Commenters were appalled at the blatant lies spread while, one commenter stated, “The fact they said that they investigated their warehouse and found nothing and said that the customers are basically lying. I can’t”. While some were voicing their concerns, others couldn’t help but to make a few puns like “it comes with flea shipping,” which is a top comment. 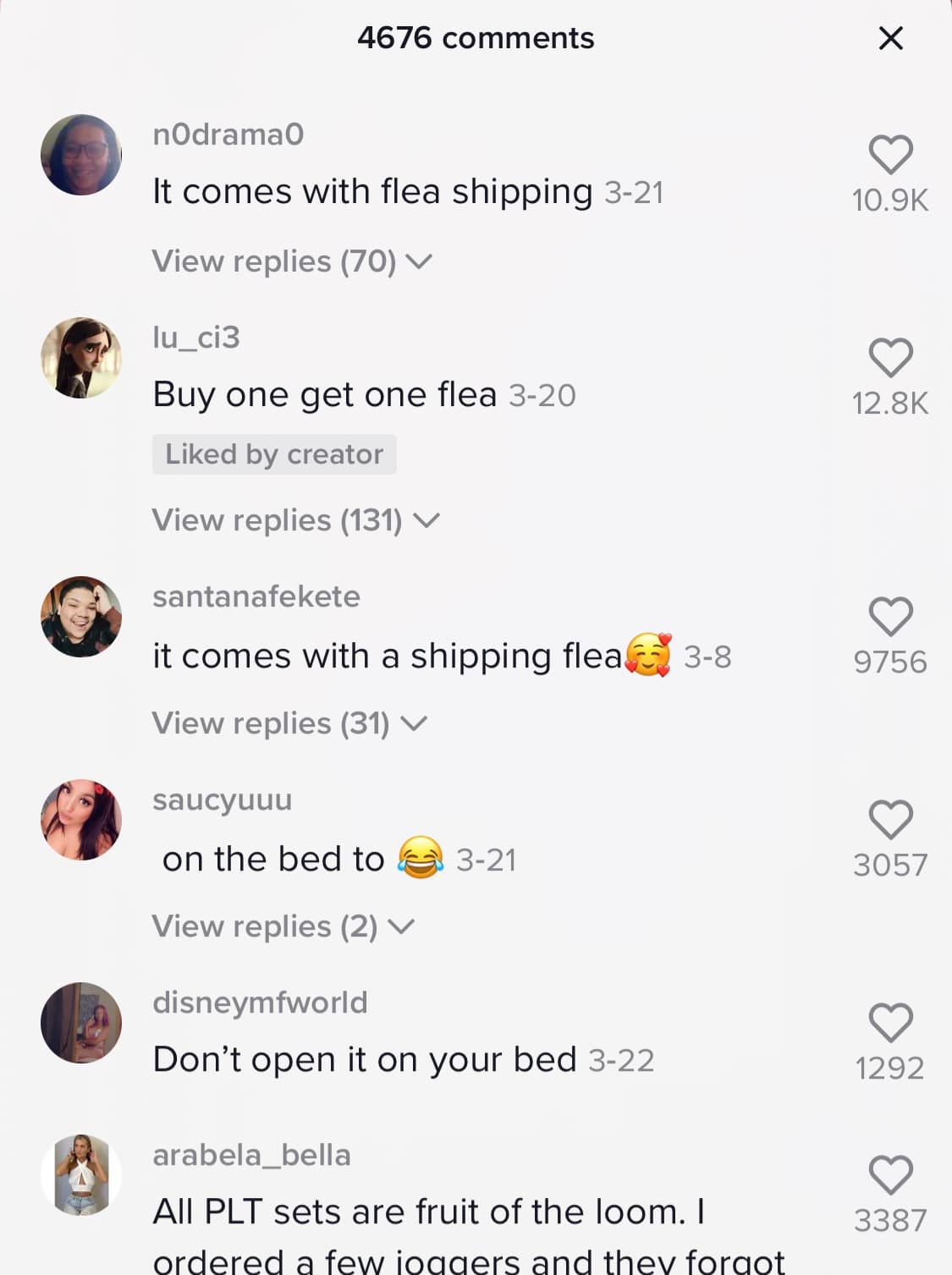 Whether it is milkshakes or matching sets, TikTok users have shown they will take to the (metaphorical) streets if they encounter something that isn’t right. With pests popping up everywhere, it is concerning how companies continue pushing out products infested with critters. It is especially surprising, when they know there are packs of Zoomers patiently waiting, camera in hand to perform their next takedown. I imagine it’s stressful for companies to realize they can’t get away with anything anymore, as TikTokers and pre-pubescent commenters hold companies hostage — forcing them to take accountability for transgressions that have been flying under the radar for years. Today it’s milkshakes, tomorrow it’s insider secrets, and I, for one am intrigued to see what will be unearthed as time goes on.

We might even find out what keeps breaking the ice cream machines — besides the cockroaches, of course.