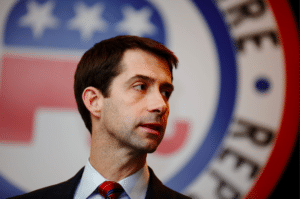 This Sunday, controversial Senator Tom Cotton, the representative of Arkansas, referred to slavery as the nation’s “necessary evil.”

The senator made this comment in an interview with the Arkansas Democrat-Gazette while discussing how slavery should be taught in schools. “We have to study the history of slavery and its role and impact on the development of our country because otherwise we can’t understand our country,” Cotton said. “As the Founding Fathers said, it was the necessary evil upon which the union was built.”

He went on to say “but the union was built in a way, as Lincoln said, to put slavery on the course to its ultimate extinction.” Instead of portraying America as “an irredeemably corrupt, rotten and racist country,” the nation should be viewed “as an imperfect and flawed land, but the greatest and noblest country in the history of mankind,” Cotton added.

Cotton spoke in support of legislation that he introduced last Thursday aiming to prohibit use of federal funds to teach the 1619 Project. The Project is an initiative from the New York Times that reframes US history around August 1619 and the arrival of slave ships on American shores for the first time.

Cotton’s Saving American History Act of 2020 “would prohibit the use of federal funds to teach the 1619 Project by K-12 schools or school districts”, according to a statement from Cotton’s office.

“The entire premise of the New York Times’ factually, historically flawed 1619 Project … is that America is at root, a systemically racist country to the core and irredeemable. I reject that root and branch,” said Cotton. “America is a great and noble country founded on the proposition that all mankind is created equal. We have always struggled to live up to that promise, but no country has ever done more to achieve it.”

Later in the interview he said “Even a penny is too much to go to the 1619 Project in our public schools.” Cotton went on to say,“The New York Times should not be teaching American history to our kids.”

Senator Cotton and The New York Times have a bitter history. In June, the Times was forced to issue an apology after publishing an op-ed written by Cotton entitled “Send in the troops”. The article, which drew widespread criticism, advocated for the deployment of the military to Black Lives Matter protests. The New York Times issued a statement saying the op-ed fell short of its editorial standards, leading to the resignation of editorial page director James Bennet.

Nikole Hannah-Jones, the director of the 1619 Project and a Pulitzer Prize-winning Times reporter, blasted Cotton’s comments justifying slavery, “where it was legal to rape, torture and sell human beings for profit.” It’s “hard to imagine what cannot be justified if it is a means to an end,” she said.

If chattel slavery — heritable, generational, permanent, race-based slavery where it was legal to rape, torture, and sell human beings for profit — were a “necessary evil” as @TomCottonAR says, it’s hard to imagine what cannot be justified if it is a means to an end. https://t.co/yScNxPq6ds

Cotton fought back in a tweet (which has since been retweeted by President Trump), saying that his comments were not “justifying or endorsing slavery” because he was merely “describing the views of the Founders.”

More lies from the debunked 1619 Project.

Describing the *views of the Founders* and how they put the evil institution on a path to extinction, a point frequently made by Lincoln, is not endorsing or justifying slavery.

No surprise that the 1619 Project can't get facts right. https://t.co/nLsb73X3Gi

Were the Founders right or wrong, @TomCottonAR, when they called slavery a “necessary evil upon which the Union was built”? Because either you agree with their assessment of slavery as necessary or you admit they were lying and it was just an evil and dishonorable choice. Which? https://t.co/22c94wWhni

In an interview with Fox and Friends, the senator addressed the backlash he was receiving for his comments on slavery, chuckling and  referring to them as “fake news” and saying “that is not what I said.”