Vogue wrote a lovely story about a wedding at Martha’s Vineyard but quickly deleted the story from the website after the wedding ended up being linked to a COVID cluster. A resident complained to the magazine informing them that the affair had contributed to a cluster on the island. 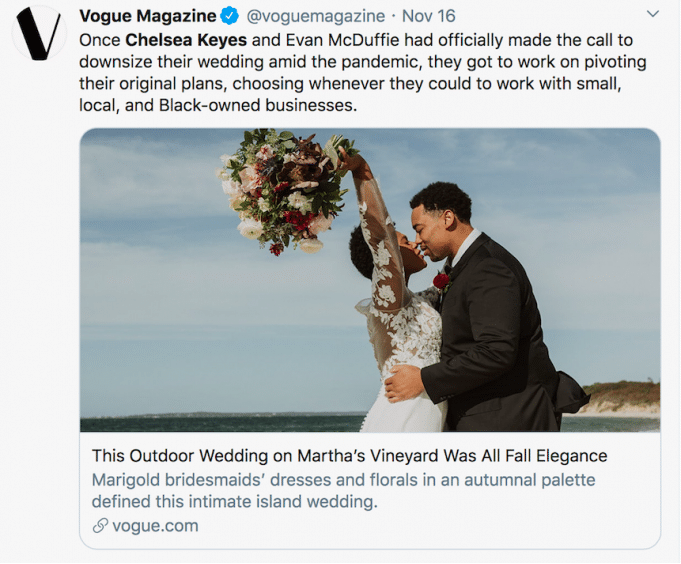 The article was posted on October 11th which told the story of Chelsea Keyes and Even McDuffie’s wedding at the Lambert’s Cove Inn in West Tisbury. There were about 70 photos featured in the article and in those photos barely any of the attendees were wearing masks or social distancing.

One of the photos featured in the article showed the groomsmen close together with a caption that read they came together after not being able to see each other because of the pandemic and their group lives all over the country.

According to a report in the Vineyard Gazette, health officials have connected ten COVID infections to the wedding. Six of those infections were island workers. In the past three weeks, the island had recorded 118 new COVID infections.

The cases have been the most the island has experienced since the pandemic started. The cluster was reported in late October but the island health officials said the venue did comply with the state and local protocols.

Guests at the wedding violated the interstate travel rules issued by Govenor Baker. The rules required people coming from outside Massachusetts to fill out travel forms and provide a COVID test or quarantine for the 14 days. However, no one was fined because the guests had already went back to their homes.

In the article the bride said, “At one point during the summer, we weren’t sure what the fate of our wedding would become. But in the end, we had the beautiful and intimate wedding of our dreams, in Martha’s Vineyard, the most special place in the world to us. I want people to know that even during a pandemic, love prevails.

She told Vogue that she was nervous about reducing the amount of guest that were invited. “There were so many family members and friends who were missed, but the outcome was a personal and magical occasion we will never forget,” Keyes added.

After finding ot about the outbreak of cases Vogue deleted the story on Tuesday the next day from its website and the social media promotion of the article. A spokesperson stated that once the magazine found out about the COVID cases they made the decision to just pull the piece.

Many people questioned that after seeing the photos and hearing about the coronavirus outbreak on the island. This outbreak happened when the surge of new cases began to rise on Martha’s Vineyard.

A representative for Condé Nast told the Vineyard Gazette that the editors “ensured that appropriate measures were being taken to prevent the spread of COVID at the event.”

Reaction’s To The Event

People on Twitter were angered by the news of the wedding. Many did not appreciate the fact that there are people who still insist on having these big events knowing the risks. Some pointed out that having a wedding in the middle of a pandemic really shouldn’t be the priority.

This user recommended other ways people can get married instead of having a wedding right now.

STOP HAVING WEDDINGS IN A FUCKING PANDEMIC

This user spoke about another wedding even they saw and found it to be quite inconsiderate to say the least. They weren’t the only ones. After seeing the news, a few users even mentioned hearing about other big wedding events that people are planning.

There was another superspread wedding in Ohio too. I am continually astonished how many people keep having big weddings this year even knowing there’s a good chance their Big Day is going to end up in the headlines for killing people.

Another user brought up a point about the lack of hospital beds on Martha’s Vineyard.

If you need any advice about whether to carry through with your pandemic-time destination wedding on an island with 25 TOTAL hospital beds, please call me.

The bride Chelsea Keyes gave her thoughts about the outbreak to a local news outlet. She stated, “While we do not know the source of the outbreak, we deeply regret the impact it’s had on our guests, family, and the Island community.” She explained that the wedding had followed the appropriate guidelines.

Keyes said that the source of the outbreak could have come from multiple places not just her wedding. “As you are aware, it is extremely difficult to pinpoint the origin of the outbreak or where it stemmed from. There was a wedding the night before ours at the same venue, as well as many weddings during that weekend that were staffed and supported by a number of individuals. For our wedding specifically, we followed the protocol of the venue and the commonwealth of Massachusetts, including having an outdoor wedding with 40 guests, designating sanitization areas, and — as a welcome gift at the ceremony — gave out custom masks made by a local MV vendor. While we do not know the source of the outbreak, we deeply regret the impact it’s had on our guests, family, and the Island community,” she explained.

Maura Valley, a spokesperson for the Island boards of health, was sadden about the rise in cases that have occured. “It was really disappointing that we got through the summer only to be hit with this in the off-season.” Valley added that the rise in cases has put the area into the state’s red zone for the communities at risk.

Having a wedding during a pandemic is definitely controversial. Over the past couple of months, couples have certainly showed their excitement to get married despite the Coronavirus like demanding your fiance to marry you at Target or continuing to have the whole event on an island like Martha’s Vineyard. The one thing that is important to remember is your actions during this pandemic can effect the people around you.