“We The People”: Review of Netflix Series by Chris Nee and The Obamas

“We the People ,” is the fresh Netflix series that teaches children about government and active citizenship through engaging animation styles and popular artists including H.E.R, Adam Lambert, Lin Manuel Miranda, and many others. Each episode in the series features a song by a popular artist and a 4-minute animated music video teaching the viewer about different aspects of the U.S government. Creator Chris Nee teamed up with several executive producers, including Barack and Michele Obama, to arm America’s youth with knowledge about the branches of government, the court system, the bill of rights, and much more. Only one season is out so far, but with some decisive tweaks, this series could be the refreshingly updated version of Schoolhouse Rock! that everyone needs — they just don’t know it yet.

“We the People” is a series built from Schoolhouse Rock! and Hamilton combined. Each of the 10 episodes educates audiences with the use of catchy songs by fan-favorite artists and psychedelic animation styles that keep viewers engaged. Each song highlights a different genre, and each music video includes a different animation style, ensuring the audience never looks away. While some songs are catchier rather than informative, the visuals serve as integral parts of the piece, sometimes giving off more critical information than the songs themselves.

Chris Nee, the creator of smash-hit “Doc McStuffins” is now the creator of “We the People”. She is a queer, Irish-American screenwriter and producer that hopes to influence the next generation by creating inclusive and informative pieces for children.

Kenya Barris is one of the executive producers, and has stated in an interview with Jimmy Fallon, “I think this conversation is about learning what this country, at its foundation should be about, and also taking responsibility for what it’s not about. I think that animation is something that lasts the test of time, and I’m really happy to be a part of it,”. While I do not think that the series dabbled in any accountability or controversy on part of the U.S., it does help teach younger generations about U.S. civics.

Priya Swaminathan and Tonia Davis are the executive producers that are also the co-heads of the Obama’s Higher Ground Productions Company. The Obama’s, their company, and Netflix have teamed up to produce a slate of inspirational and informative stories that will be be rolled out in a multi-year production plan.

Barack and Michelle Obama announced “We the People” as their first piece as a part of the Netflix family. Their press release describes the series as “an exuberant call to action for everyone to rethink civics as a living, breathing thing, and to reframe their understanding of what government and citizenship mean in a modern world.” 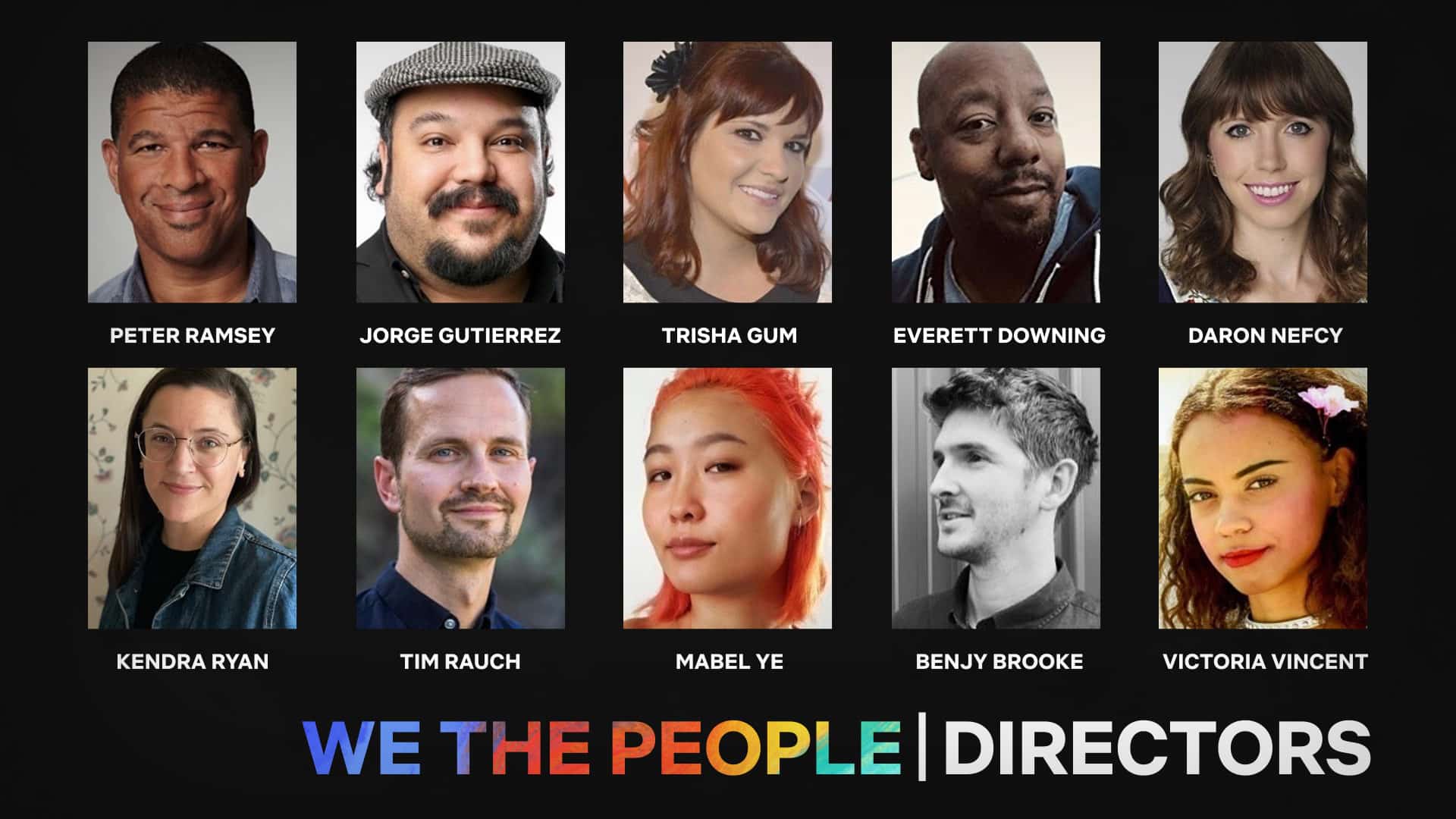 H.E.R collaborated with Oscar-winner Peter Ramsey, known for Spider-Man: Into the Spider-Verse to create the first episode on the series entitled, “Active Citizenship”. The song highlights the different ways to actively participate in government and politics at any age. “It’s something that makes us feel good, makes us want to fall in love and makes us sad or makes us learn. And so, what better way to teach, especially people at a young age or of all ages,” the twenty-three year old singer said. The lyrics encourage viewers to reach out to local politicians, volunteer, and vote while creative and refreshingly representative visuals heighten the viewing experience.

While the entire series reinforces a bipartisan approach to civics and active engagement there are several colorful visuals lifting up voices of the underrepresented. My favorite lines inlcude,”Wrote a letter to the mayor can you hear me out? I want to talk all on the issues that I care about” and “Know you’re never too young to make a difference. You have the power to be an active citizen”.

Cordae lent his musical talent to the third episode in the series, of the same name as the single, “Taxes”. This song has made it to the list of stand-outs because it takes a stand and articulates an argument while educating on the basics of taxation in the U.S. Several other songs in the series should look to this tune to show how to provide more than the basic understanding of topics. Cordae describes how taxes are used for a variety of services and questions how the money is used to help communities while larger portions of the money go towards defense. This perspective is evident in the lyrics, “You see 9 percent of taxes help provide to the poor. But 15 goes to defense and supplyin’ the war. Now if you ask me I’d say the numbers are shrewd. But we agree that with no military we’re screwed.” These lyrics, along with several others amongst the series, highlight progressive attitudes and inequalities while maintaining an informative and bipartisan approach to the educational aspects of the show. If more songs in the show focused on forming nuanced arguments rather than skirting around controversy, the series and the viewers would be far more benefitted.

Gorman’s stand-out poem she wrote in the beginning of the Coronavirus pandemic perfectly wraps up the first season of “We the People” with the message of a united populous growing stronger together no matter what struggles try to push them down. It is a spoken ballad meant to uplift any listener while applauding the multitudes of healthcare workers, grandmothers, and support systems that allowed people to lean on one another to get through the pandemic that shook everyone to their core. As per usual with this series, the visuals did not disappoint and provides the warm and inspiring ending the series deserved.

Kyle co-wrote and performed the song “Link Up” for the sixth episode in the series entitled “Federal vs. State Power” and Tim Rauch directed the episode. They tackled the project head on combining catchy music with thoughtful and stylistic animations. However, this is one of those songs that does not share equal power in musicality and visuals. While the song itself is very catchy and great to listen to, the visuals do most of the heavy lifting when it comes to education and the spreading of information. I am afraid that more than half of the educational value of the song comes from the animation and thus listening to the song alone does not deliver a full understanding of the differences in state versus federal power. This gripe can also be extrapolated to several other songs in the series including Andra Day’s “The Courts” that delivers more court case explanations through text in visuals rather than lyrics. That is not to say there is no explanation within the songs as in “Link Up” Kyle states, “it’s a balance of power between you and ours…we might just have to link up, Federal laws supporting state needs link up”. However, there is more in-depth information provided in the visuals that actually go over the different roles the federal and state government play along with what they are in charge of specifically. Although the song itself is catchy, I wish there was more concrete information in the lyrics because kids especially are going to listen to the lyrics much more than they would read text in the background of the music video.

This song that is found on episode 7 of “We the People” entitled, “Immigration” celebrates being a citizen and explaining the process one can take towards citizenship. If you count the one line that chalks our immigration process up to, “Gotta spend a few years then pass a test, take an oath saying you love this country the best”. I believe this song missed a massive opportunity to say something truly meaningful about the deplorable conditions of those trying to enter the United States while commenting on the long-winded nature of the pathway to citizenship in the U.S. However, rather than opting for anything slightly controversial the song celebrates citizenship while providing no real substance other than the small world-esque visuals. The animations show people from all around the world as they dance with a United States flag over the song of celebration.  While the song is catchy and the visuals mention famous immigrants that impacted the U.S like Panamanian and infamous baseball player, Mariano Rivera, beneath the surface the song is trying to get by on a thoughtful message with an underwhelming follow through.

To Watch or Not To Watch

Although the series could be doing more to promote accountability for the U.S government and highlighting current injustices, the series’ purpose is to educate kids on the basics aspects of government and civic engagement and it does so, exceptionally well. The music can be enjoyed by itself for informative and pleasurable purposes while the animated videos serve to deliver a fully educational and fun experience for a variety of ages. The series is meant for a variety of ages, genders, and ethnicities as it provides a representative look at what American looks like now. Some of the songs depend far too much on the animation to carry the educational aspect of the episodes but others are engaging, educational, and enlightening in every way. By maintaining a bipartisan approach to civic engagement, the series comes across as unbiased and lacking strong arguments — which was the point even if I wish it wasn’t. Perhaps the upcoming seasons of the series will lean into the progressive attitudes of it’s producers to provide an even fresher look at the U.S government. Until then, you’ll find me singing these songs on repeat and showing the series to anyone who will watch. I mean who wouldn’t want to listen to Lin Manuel Miranda rap about the branches of government?

Netflix’s “We The People” is available to stream now.