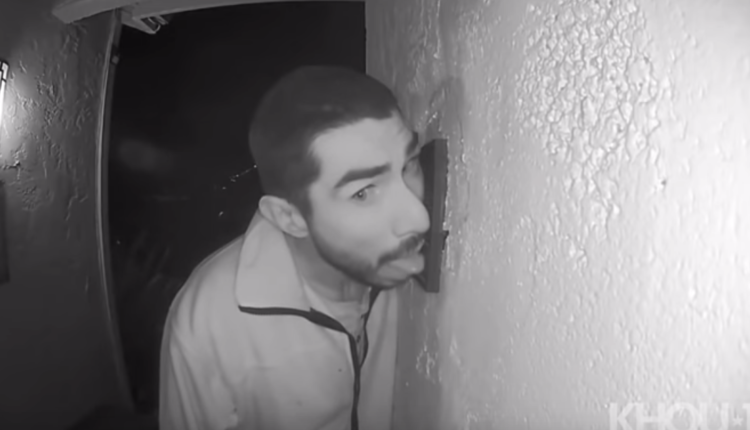 Some crimes are normal. Some crimes have a need for money or power, and look. Do we at What’s Trending like crime? No, of course not. We like writing about weird crimes that go bad, but otherwise? Yeah, we’re not fond of crime. Although, we would like some psychologists to tell us what’s going on with this one. This is not a normal home invasion. This is just a man in California, who walked up to a doorbell and licked it for three hours.

Folks. What a ding dong.

The man’s name is Robert Arroyo, and he was caught on surveillance camera at a home in Salinas, California licking the doorbell for, again, three hours. He was also seen urinating on the lawn. The home was that of the Dungans, who were gone for the day, but whose children were sleeping in the house at the time. The Dungans have a shockingly good attitude towards this uhh– “incident” or whatever you want to call it. They got a notification at 5 am and managed to witness the door licking madness from afar.

Said Sylvia Dungan, as quoted on Kion546: “I thought, boy there’s a lot of traffic. I go, 5:00 in the morning? My son doesn’t get home till 6:00 a.m. well then who the heck is that?” Although charges will be filed for two misdemeanor charges, petty theft and prowling, overall, you just sort of have to appreciate the incredible goofiness of the situation.

Added Dungan: “You kind of laugh about it afterwards because technically he didn’t do anything… This just kind of reinforces how important it is to have security within your home.”

Also, the entire thing looks kind of dirty, right? I wonder what he thought the doorbell was… hrmmm!

What do you think of this huge door licking weirdo? Let us know in the comments or on Twitter at @WhatsTrending.