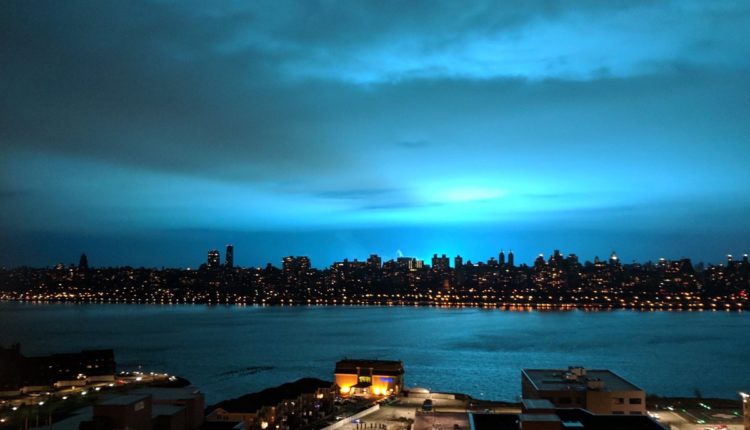 I’m tight cause I KNOW someone just got superpowers from that blue light. #bluelight #nyc. pic.twitter.com/NwGXmuTAoJ

Look. Life is weird. One moment you’re trying to figure out the hectic ever changing subway schedule, the next you’re looking above into the sky, and seeing an intense blue glow, the likes of which you’ve not seen before! I mean, New York of the movies is no stranger to insane science fiction based oddities engulfing the cities before the heroes come to save the day. I mean, both Ghostbusters (80’s and 10’s one, aka the good two) had the city engulfed in a blue light, to to mention countless Marvel movies, big monster movies or the ending to Super Smash Bros: Ultimate when you defeat Galeem and the creature of darkness, engulfing the sky in their hue. But I’m sorry, we’re not here to talk about Super Smash Bros, the thing I would always rather be doing/playing/existing as at all times. We’re here to discuss why New York City was awash in blue.

These gender reveal parties are getting out of hand! #Astoria #Queens #NYC #Bluelight pic.twitter.com/EQS2afci6L

And it had to do with a mishap at the Con-Edison plant. Specifically, the breaking of a few transformers on 20th Avenue and 32nd Street in Astoria, causing an arc light, and making the city glow a ferocious blue. No one was harmed, and the power outage only lasted a few seconds, but boy oh boy, were the videos taken from the event kind of— beautiful. It could be see as far as New Jersey.

I think aliens have landed in NJ again…

Man. If I saw a blue light in the sky, I wonder what I would do? I guess go crazy. I mean, what would you HAVE me do? Remain perfectly sane as every sign of an alien invasion is on my door step!? Ridiculous! Maddening! Oh well. I’m ready for more craziness, myself.

What do you think of the blue light? Let us know in the comments or on Twitter at @WhatsTrending.

VIDEO: Things You FORGOT Happened in 2018