On September 19th, a Twitter user shared this now-viral clip, not included here due to nudity. The original tweet now has over 35,000 retweets and almost 100,000 likes. The Waffle House staff refused to return a phone left behind unless the customers paid the bill that they skipped out on. At the peak of the argument, one of the male customers lost his patience, and decided to walk behind the counter. Confronted by the two employees, he started punching the female employee resulting in total mayhem. 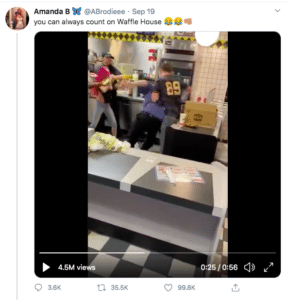 One of the female customers dashed ahead to snatch the restaurant’s phone away from another distressed employee that seemed to call the cops. During the intense moment the female customer’s spaghetti strap tank top loosened up, exposing her breasts. The video ends when the male customer is held in the rear choke position.

I didn’t record this video but it was on our local fb chat page pic.twitter.com/MyfB7LRQGU

As if this was not enough of a spectacle, the troublesome trio made a dramatic exit. The white female customer made sure to carry her friend’s fallen wig off the floor before leaving the restaurant. Left behind were the bystanders and employees in a state of shock after the incident.

What perhaps is most intriguing about this story, is the fact that this year alone witnessed a handful viral videos of fights taking place specifically in Waffle House. It’s like a modern day arena!

This video, from a fight around September 16th, shows a man losing a fight, even getting hit with some sort of cart by his opponent.

if i pull up to the waffle house at 3am & i dont see this … im not eating there 🙅🏾‍♂️ pic.twitter.com/VphxuGsPBL

Round 2 features another duo fighting while a concerned bystander calls for the duo to “break it up.” A customer with a little less tact quietly asks for their bill, saying, “excuse me please give me my check please!”

This is where things get even crazier. In one viral video, the cooks start fighting each other. Instead of watching or complaining, the customers decided to ignore the fight and started cooking their own food. If you’re hungry, the only thing that matters is getting some food.

Waffle House. The cooks fight and the customers cook for themselves pic.twitter.com/dQUNgqeC7M

It is important to remember the roots of these viral videos. Many years ago, a Vine about Waffle House went viral. Two employees started fighting each other. Instead of concern, the Viner loudly yells, “can I get a waffle? Can I PLEASE get a waffle?” This video was so prominent in culture for so long, that many of the comments on the most recent viral Waffle House fighting video reference the Vine.

For some reason, Waffle House seems to bring the worst in humanity. Perhaps this phenomenon results from the already bad reputation of the franchise. But jokes aside, a lot of people were very upset about these events that took place in the restaurant. Many were especially considered about the safety of the employees that work late hours for a minimum wage.

One Twitter user joked that Waffle House is just part of the classic East Coast experience, using a crazed gif to help get the point across. “Me explaining to my west coast friends, how Waffle House is such an essential experience in your life cuz you can enter a dirty establishment yet get great food and wonderful entertainment by watching the server fight the manager all while the cook is outside enjoying a cigarette.”

Me explaining to my west coast friends, how Waffle House is such a essential experience in your life cuz you can enter a dirty establishment yet get great food & wonderful entertainment by watching the server fight the manager all while the cook is outside enjoying a cigarette pic.twitter.com/k1TsZDSCby

This one reads “Waffle House needs this woman as a manager. Cause McDonald’s don’t play,” with a cry emoji. With the Tweet is a video, not shown here due to nudity, of a female McDonald’s manager easily taking down a female customer.

Violence is not the answer to this situation, and these employees deserve more respect for working such long hours—especially since they’re likely working for or near minimum wage. Their safety should be above anything else. That being said, as long as these fights continue, Twitter will continue helping these videos go viral.