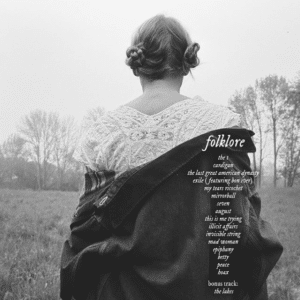 On Tuesday, July 23, Taylor Swift shocked and surprised her global fan base as she took to social media to announce that her new 8th studio album ‘Folklore’ will be released at midnight. In a series of 12 posts on Instagram which show Swift walking by herself through a black and white forest in thick fog, Swift introduced the album to the world. Although every album that Swift releases comes as a sweet surprise to fans, the upcoming release of ‘Folklore’ differs from the traditional way that she usually promotes her music, which has increased the shock factor on her latest announcement.

Most of the things I had planned this summer didn’t end up happening, but there is something I hadn’t planned on that DID happen. And that thing is my 8th studio album, folklore. Surprise 🤗Tonight at midnight I’ll be releasing my entire brand new album of songs I’ve poured all of my whims, dreams, fears, and musings into. I wrote and recorded this music in isolation but got to collaborate with some musical heroes of mine; @aarondessner (who has co-written or produced 11 of the 16 songs), @boniver (who co-wrote and was kind enough to sing on one with me), William Bowery (who co-wrote two with me) and @jackantonoff (who is basically musical family at this point). Engineered by Laura Sisk and Jon Low, mixed by Serban Ghenea & Jon Low. The album photos were shot by the amazing @bethgarrabrant. Before this year I probably would’ve overthought when to release this music at the ‘perfect’ time, but the times we’re living in keep reminding me that nothing is guaranteed. My gut is telling me that if you make something you love, you should just put it out into the world. That’s the side of uncertainty I can get on board with. Love you guys so much ♥️

In the past, Swift has strategically built much anticipation and mystery surrounding her upcoming albums weeks and sometimes months before any songs have been released. For Swift’s 6th studio album, ‘Reputation’, which was released in 2017, she wiped the content all of her social media accounts to post hints and to give sneak peeks of what the theme and sound of the album would be like to unknowing fans. In the summer of 2019, Swift took a similar approach for promoting her 7th studio album ‘Lover’ through social media as well. Taylor’s fans, who call themselves ‘Swifties’, have become excellent de-coders as they try to figure out what the double meanings are to Swift’s social media posts. Swift also tends to routinely release a new album every two years, but, since it hasn’t even been a year since Swift’s ‘Lover’ album was released, her breaking tradition also adds to the excitement of the unprecedented album.

As news of the album spread like wildfire, fans took to Twitter to express their excitement. One fan was thrilled about the aesthetic of the album.

Another fan Tweeted that Swift ‘saved 2020’ with the album release.

This just in @taylorswift13 saves 2020 with “Folklore”

Swift, who is known for her thorough planning, wrote on Instagram that “most of the things I had planned this summer didn’t end up happening, but there is something I hadn’t planned on that DID happen”, saying that ‘Folklore’ was just as unexpected to fans as it was to Swift. Although no samples of her songs have been released yet, Swift wrote that she “poured all of my whims, dreams, fears, and musings” into ‘Folklore’, possibly hinting at what the style of music the album would be in. In recent years, Swift’s albums have adopted entirely different sounds to them as she continues to explore and expand her style of music. When Swift’s career began in 2006, she immersed herself within the country music scene. However, in 2012, Swift released her 4th studio album ‘Red’ which marked her shift into the pop genre of the music industry. Many fans have been left guessing what kind of vibe and sound the new album will have.  On Twitter, one fan guessed that ‘Folklore’ will in fact be in the folk music genre.

Swift’s Instagram post concludes with her thought process on releasing the album during such a difficult and uncertain time, saying that “before this year I probably would’ve overthought when to release this music at the ‘perfect’ time, but the times we’re living in keep reminding me that nothing is guaranteed.” Swift continued with that her gut told her “if you make something you love, you should just put it out into the world. That’s the side of uncertainty I can get on board with”.

‘Folklore’ will feature 16 songs that Swift “wrote and recorded in isolation” and collaborated “with some musical heroes of mine”, including The National’s Aaron Dessner, Bon Iver, and Jack Antonoff. The song “exile” features the indie folk band Bon Iver who is known for songs such as ‘Skinny Love’ and ‘Holocene’. The deluxe edition of the album will also include a bonus track. In addition to 17 new songs, ‘Swifties’ have also been gifted with a music video for her new single ‘Cardigan’ which will premiere with the release of the album.

The music video for “cardigan” will premiere tonight, which I wrote/directed. A million thank you’s to my brilliant, bad ass video team – cinematographer Rodrigo Prieto, producer Jil Hardin, executive producer Rebecca Skinner, AD Joe ‘Oz’ Osbourne, editor Chancler Haynes, special effects wizards David Lebensfeld & Grant Miller, and set designer Ethan Tobman. The entire shoot was overseen by a medical inspector, everyone wore masks, stayed away from each other, and I even did my own hair, makeup, and styling 😂

As the countdown to midnight continues, tell us what your thoughts are on Taylor Swift’s album release announcements in the comments! What’s your favorite Taylor Swift album? Follow What’s Trending for more of the latest celebrity news!