Kindred partnered with WarnerMedia’s HBO and Active Minds to launch a virtual training and certification program about mental health, specifically geared towards influencers and content creators. The goal of this program is to help leading social voices use their platforms to communicate more effectively with their audiences about mental health and the resources available for those who are struggling. Influencers may not feel responsible for the mental health of their followers, but when you have an audience of over a million followers, content creators should at least know how to effectively communicate with their audience and be able to guide them to the right resources.

Thankful to @kindred and @HBO for such an enlightening and educational course on mental health and thought leadership. We are honored to be certified and welcome the opportunity to help everyone we can thru the impactful and eye opening messaging that we received. Thank you. 🙏🏽💕 pic.twitter.com/ocJWbxvFG6

The partnership between the three companies, Kindred, HBO and Active Minds, is a powerful way to encourage conversations about mental health and continue to destigmatize mental illness.

Kindred is a startup founded with a mission to empower, connect and teach leaders in order to encourage more sustainable and purpose-led businesses. Kindred is co-founded by Deep Focus founder Ian Schafer and former Buzzfeed executive Elyssa Byck.

As you’re probably well aware of, HBO is a television network owned by WarnerMedia Studios & Network. Vice President and Brand Marketing Dana Lichtenstein said, “HBO has a long-standing commitment to raising awareness and understanding of mental health issues in our storytelling.”

We’re thrilled to help influencers learn how to de-stigmatize conversations around mental health. Learn more about our mental health certification course for influencers in partnership with @Kindred & @HBO. 👇https://t.co/nZPPVANZ7j

Inside @Active_Minds' mental health certification course for influencers in partnership with @Kindred & @HBO! We're empowering all to be a part of the conversation – it's messy but worth it. Grateful to have co-led this w/ @beckyfeinAM & @MichiganMargo https://t.co/MjQOM95nWF

Influencers and content creators with large followings have a chance to make a real impact in the lives of their followers right now. Accessibility to mental health resources are limited already, and the demand for these resources is only rising with the impact of the coronavirus pandemic and the social and political unrest America has faced within the last six months. Influencers have the unique opportunity to destigmatize important conversations around mental health and trauma by making those conversations easier to participate in. But with such large audiences comes great responsibility. It is all too easy to make a mistake when discussing such important and sensitive matters such as mental health. Influencers should know how to communicate with their audiences in a constructive and informative matter, backed by science and facts to minimize misinformation or anything that could be harmful.

The certification consists of a three to four hour training program that will help guide influencers how to effectively open up and talk about mental health honestly and respectfully. TikTok creator Hope Schwing said, “…what I gained from this was a more well-rounded understanding of how to open up and talk to others about mental health…I’ve done so in the past, and using the skills I learned through this initiative combined with what I have done will make me more comfortable in the realm of discussing mental health.”

Jen Chae (From Head To Toe on YouTube) opened up to her audience on suicide prevention day about her struggles with PTSD and depression after experiencing a house fire. “It really never gets easy to talk about it but it DOES become more empowering each time I choose to speak openly because it re-trains my brain to learn that vulnerability is not weakness. Feeling something more than someone else is not weakness,” she shares in her Instagram post. 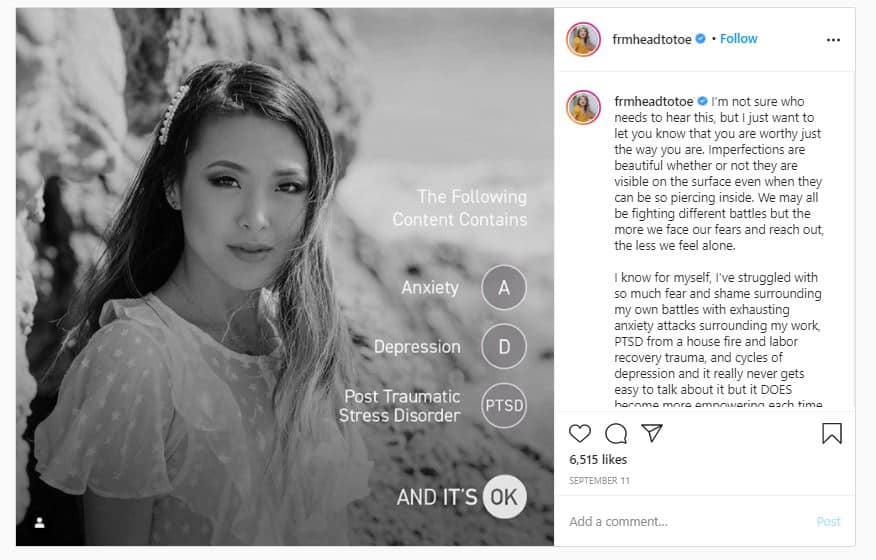 She ends her caption with a quote from the Kindred workshop she participated in, “you don’t need to be an expert to help, you just need to be there.”

Creators with millions of followers have already signed up to be a part of Kindred’s first mental health class such as Hope Schwing and Josh Sadowski. The digital training is now available for any content creator who applies and is accepted.

Grateful to be in this great mental health certification program with @HBO, @Kindred, @ActiveMinds #ItsOk, and #KindredCertified!#holistic #purpose #neuroplasticity pic.twitter.com/ExKgkJSFT8

Honored to take part in the @Kindred #MentalHealth Communications Certification in partnership with @Active_Minds & @HBO! Each of us has the power to influence our networks and can normalize & destigmatize mental health conversation. #kindredcertified #HBO pic.twitter.com/RW33FMGCYy

You Could Be A Part Of The Change

The inaugural class includes 100 hand selected influencers, activists and advocates across a wide array of industries including TV and film, sports, art, activism and more, with a combined social reach of 110 million followers. That is 110 million people who have the potential to be impacted by the messages shared by these creators, making it all the more important to be trained with the right facts, resources and approach to be able to communicate with their audiences sensitively and effectively.

Kindred’s innovative partnership with HBO will enable the program to scale to hundreds of content creators, influence a cultural movement to continue destigmatizing mental health and eventually empower a new generation to join HBO’s “it’s OK” initiative, which also aims to destigmatize mental illness and encourage more conversations surrounding mental health. Creators interested can apply now to take part in the program for free at kindredcertified.com.