Many are relieved to see "divorced" in this TikToker's username.
By Savannah Moss

A TikToker, known as @disabledanddivorced, reports that she was recently fired from her job when asking for accommodations for her ADHD and autism. When opening up to her husband about the upsetting situation, his response was less than supportive. The TikToker, Abby, shared recordings of her husband berating her in a series of TikToks.

I submitted for accommodations at work and was fired because they said no. My husband says I sabotaged myself because he doesn’t understand #autism

In the first video, the man calls her “incompetent at socialization.” She responds with her defense, reminding him that she is autistic, which is usually an area of struggle for those with Autism. In the second video, she says she is not being fired for being incompetent, where he disagrees and says that she is. He claims that she is “incompetent at everything except for doing work.”

In the final video, Abby’s almost ex-spouse is heard to be crying, asking her to lower her standards. He claims that “you push everyone away because of your standards” and asks her again to “please lower your standards.” She reiterates that she will not be doing that, not only for him but for anyone. He responds that he has lowered his standards “so many times because the world I live in.” Abby responds that she thinks that is sad for him, but she refuses to do that and says it is “absurd.”

ex asking me to lower my standards when my expectations are set by his promises. #gaslighting #manipulation #autism

Many people were sympathetic for Abby, with one person responding with “He actually thinks you’re incompetent and he still would think that if you got fired or not you shouldn’t be with someone who views you like that.” Though many were concerned for what sounded like verbal abuse coming from the husband, others were more concerned with the issue at hand: why would someone be fired for asking for accommodations when having a disability? One person asks “Isn’t that against the law?” while others encourage Abby to sue. Other people, who are also disabled and struggle with the same thing Abby reports in the video, note how hard it can be to have ADHD or Autism and be in the workplace. 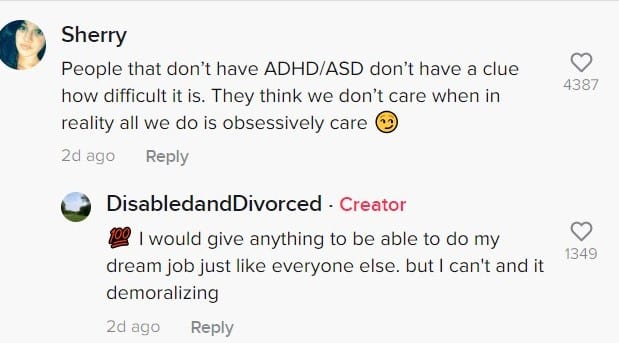